The compact Phantom VEO4K-PL Super Slow motion camera capable of shooting 5-1000 fps at 4K resolution with 72GB of on-board RAM and on board CFAST 2 data transfer capability too, to allow 5.6 seconds of record time at 1000 fps of 4K capture.  This will create 224 seconds of 25p playback (or almost 4 mins in 25p!).  It's body only weighs 2.5kg and comes equipped with wireless remote control as standard.

Until now, The Phantom Flex was the only camera capable of 4K super slow motion capture, however, the Phantom VEO4K achieves this in a much more versatile format, since it is both lightweight enough for shoulder-mounted use (fully stripped-down, the body weight is just 2.5kg) and has a form factor smaller than a RED EPIC.  Most importantly, compared with the very hungry 120W Phantom Flex, the VEO 4K only draws a frugal 80W of power consumption.  Lower power demand means less batteries, making travel easier and the smaller, lighter size also means that you can mount the camera on a gimbal, crane or jib without issue.

The camera includes a global shutter too and optical low pass filter plus 72GB of on-board RAM and on board CFAST 2 data transfer capability too, to make it perform with the same image performance as a Phantom Flex4K-GS but with the convenient form factor of a Phantom VEO. 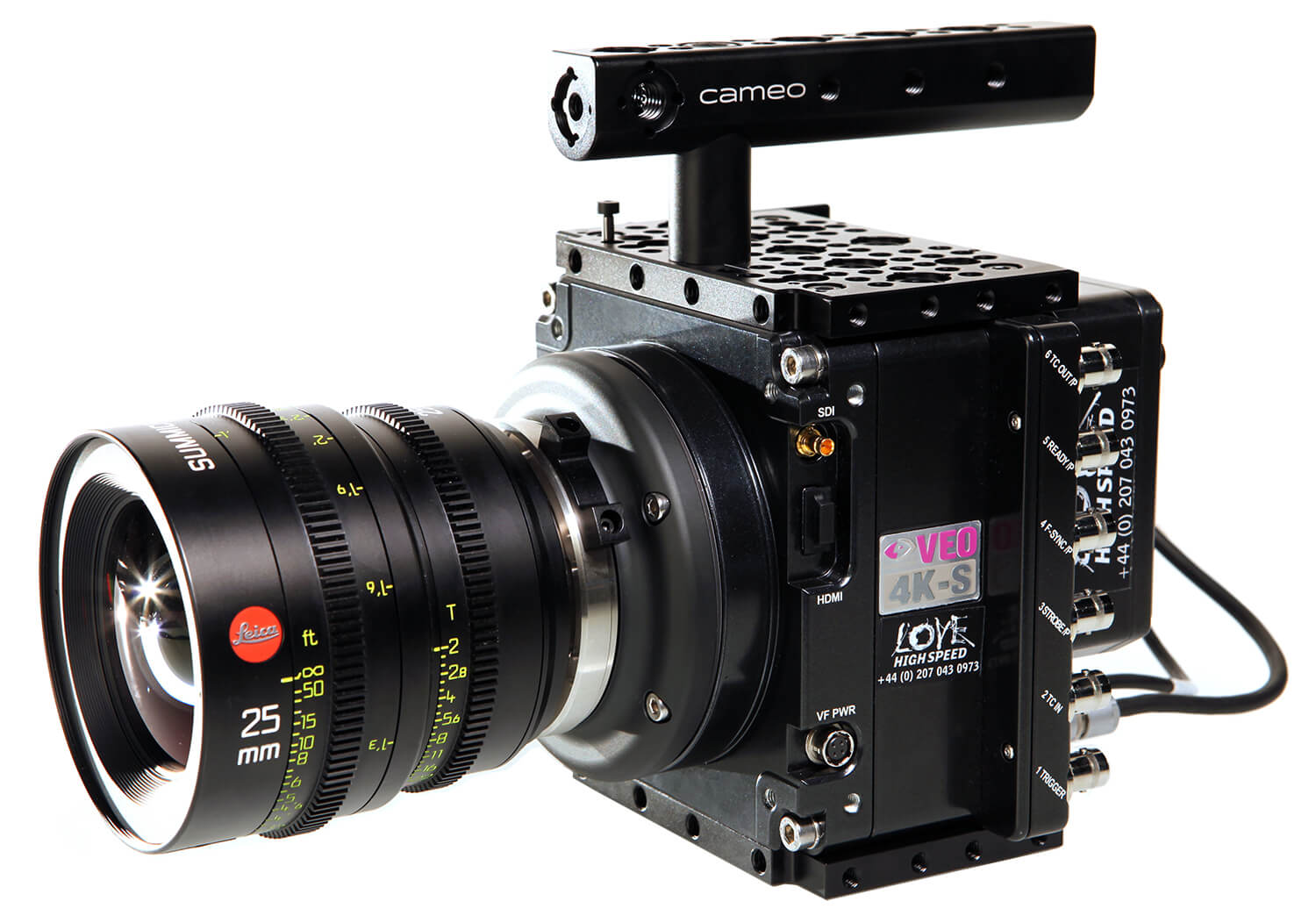 Supports up to 4K resolution

At 4K resolution the VEO4K offers super-35mm field of view and depth of field. All industry standard resolutions are available including a 2:1 Anamorphic mode.

Unrivalled in quality, shoot between 24fps and 1000fps in full 4K resolution in RAW or ProRes formats.

All Love High Speed's Phantom VEO4K cameras come with the maximum 72GB internal RAM as standard. Shoot continuously for 5.7 seconds at 1000fps at 4K. Resulting in a shot lasting over 3 minutes 40 seconds on playback.

Phantom cameras are unconventional in that you will typically trigger the recording after the action and then decide which part of the cached clip to keep.  There is a save process to transfer the footage from the cache RAM to a storage medium.

The Flex4K uses a CineMag for safe storage, which docks to the camera and is very fast.  In contrast the Phantom VEO4K offloads internally to removable CFast-2 cards.  These offer convenient large storage but the offload time is slower, so the regular route is to trim the clip in-camera and then transfer to the card, which can take several minutes for a long clip.

The VEO4K does has an advantage over the Flex4K as it incorporates a lightning-fast 10-Gbit connection which dramatically increases the speed at which you can offload raw data from the camera, but you must be tethered to a computer system. Contact us for more information.